“Driving from the airport into the city, we passed many socialist housing blocks with bullet holes all over them, lit by the full moon. What struck me were the flowers growing over the buildings and the moving silhouettes behind the curtains. It had a beauty of its own. A beauty I would discover in many parts of the city; the beauty of people being proud of Sarajevo, reviving its characteristic elements, but never denying its past.“

Most monuments have been renovated, like the national library and the twin towers. Though there is one essential element of the city that has never recovered since the war: the tram network of Sarajevo…

Today: Means of getting from A to B

…the first of Europe, symbolic of innovation and resistance during the siege, but nowadays merely a means of getting from A to B. The tram system of Sarajevo should be treated as a monument as well. It might not be a static construction, but it has played such a central role in the city´s history and has much potential for its future as well. It should be seen as a mobile public space, a room with a view. 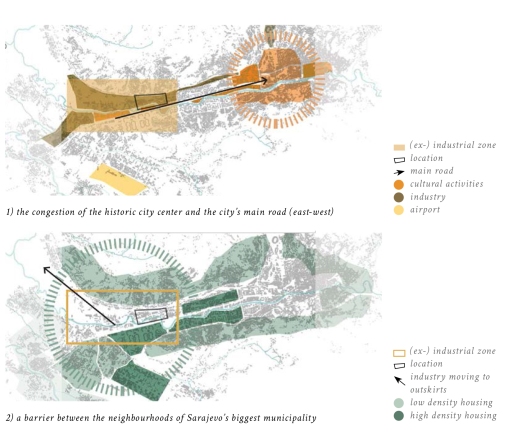 The heart of the tram infrastructure lies in Alipasin Most, in the ex-industrial area. Industry is moving to the outskirts, leaving behind an undefined landscape, exactly in the center of Sarajevo’s biggest municipality: Novi Grad. At the moment the area forms a barrier between the neighborhoods to the north and the south.

My proposal is to open up the area, taking away the barriers and enhancing connections both physically and visually. The intertwining of the tram workshop site with its surroundings would enable new activities to develop and in turn revitalize Alipasin Most.

Developing the tram needs a boost and for that cooperation is crucial. The small office buildings scattered over the site would be replaced by a single unifying structure, that gives space for other companies to join. The new building would form a bridge, connecting all activities at the tram site.

The bridging building consists of a prefabricated timber structure, fitting in with the industrial character of the site, but also referring to the Ottoman architecture, with its cantilevering balconies and layered facades.

The facade is an important element of the design. Towards the park it has solar panels across the full length, offering shade for the offices and creating electricity in a sustainable way. By integrating the newest technologies, the tram can become a renewed symbol of innovation.

My proposal contributes to the sustainable development of Sarajevo in multiple ways. By adding public activities it would stimulate the local economy and encourage the decongestion of the historic city center and main road. The investment in tram infrastructure would reduce the use of cars and with it the smog and air pollution.

Most importantly it would foster community interest and collaboration by reinstating an iconic mobile monument from the city’s past.